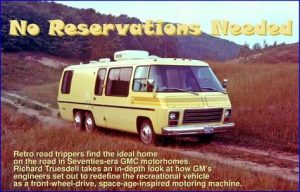 The GMC Motorhome was manufactured by the GMC Truck Division of General Motors from 1973–1978 in Pontiac,  Michigan as the only complete  motorhome built by a major auto/truck manufacturer. Manufactured in 23 and 26 ft  lengths, the design was noted for its front-wheel drive and its low profile, fully integrated body.

The motorhome had a front-wheel-drive transaxle, which GM called Unified Powerplant Package, originally used in the Oldsmobile Toronado with an Oldsmobile 455 cu in (7.5 l) V8 from the Toronado, but the later models made use of the 403 cu in V8. Cadillac employed the 501 cu in engine.  The final drive was connected directly to the transmission, and power was fed to the front wheels using half-shafts that ran under the front portion of the engine. The engine was fueled with regular gasoline stored in two 25-US-gallon tanks. 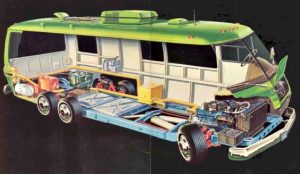 The GMC was equipped with front disc brakes and drums on all four rear wheels. The front-drive configuration eliminated the driveshaft and rear differential and solid axle found on most front-engined motorhomes. As a result, the floor could be built with about 14 inches clearance above the roadway. The floor was too low for a rear cross axle, and GM designed the rear suspension as a tandem pair of wheels, mounted on bogies which rode on pins attached to the sides of the low-profile frame. With the exception of the wheel wells, the rear suspension does not intrude into the living space. The rear bogies are suspended using a double-ended convoluted air bag that is pressurized by an automatic leveling system to maintain the designed ride height. The leveling system can also be manually controlled to level the coach at a campsite.

Body construction consisted of a rigid frame made of welded aluminum extrusions. The body frame was mounted on the chassis steel ladder frame using body isolators. The floor was marine plywood,.  The body panels are fiber reinforced plastic (fiberglass) below the waistline frame extrusion and at the ends. The upper side body and roof panels between the ends are sheet aluminum. GMCs are notable for their large expanse of windows, which redefined the RV industry at the time.  Rear lower compartments provide space for generators and propane tanks. GMCs were optionally supplied with generators from Onan in 4,000 watts and 6,000 watts.

GMC Transmode: This is the product name designating a vehicle whose chassis and body were produced in the GMC plant but delivered to another upfitter who completed the coach. For instance, some were completed as people movers and used by Hertz to transport customers from airport terminals to rental car lots. Some units were sold to government agencies and used as mobile labs. Still others were delivered and finished out with interiors for use as motor homes. In other words, a Transmode could have seen service as a motor home or as a special purpose vehicle without living facilities installed. 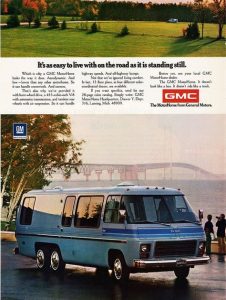 Enjoy watching an original advertisement on YouTube by clicking on the link below!